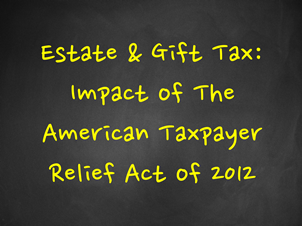 A question we are sometimes asked is, "What impact did The American Taxpayer Relief Act of 2012 have on estate and gift tax rules?" It's a good question. Let's talk about it.

Under prior law, any unused exemption amount that one spouse used was not available for another spouse to utilize to offset their estate. The 2010 Tax Act added a provision that made the exemption amount portable, and therefore allowing any unused portion of an estate tax exemption not utilized by a taxpayer available to their spouse. This law change was made permanent by the 2012 Tax Act.

If you have questions about this, feel free to comment below or if you would like to speak with one of our CPAs about how this will specifically effect your taxes, fill out this brief form to schedule a complimentary accounting consultation.