While providing traditional accounting services, we go beyond that by discovering our clients’ needs and then exceeding their expectations.

Each shareholder and associate share the same commitment to the Firm’s philosophy:

Give each client personal attention and spend the time needed
to completely understand their circumstances.

Contact us today to determine the best path for you. 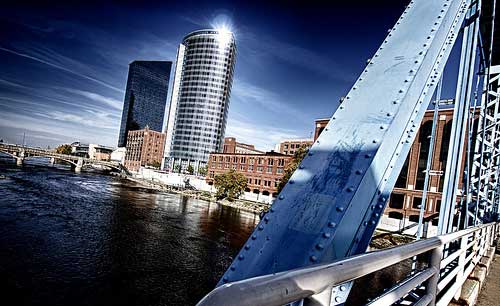 Once known as the ‘furniture capital of the world’, Grand Rapids, Michigan is thriving, with a wide variety of culture centers, world-class entertainment and restaurants, and state-of-the-art health care. Visitors can fly into the Gerald R Ford International Airport, travel by rail on Amtrack, or drive in on I-96 and US 131. (Photograph of Grand Rapids by Jack Amick)

Situated on the edge of Rosa Parks Circle - downtown's community square, the Grand Rapids Art Museum has become one of the city's iconic architectural landmarks. The works on display inside the building are just as impressive. Collections range from Renaissance to Modern Art, with a special focus on 19th and 20th century European and American art. GRAM hosts a constant and varied rotation of visiting exhibits, from "Diana: A Celebration" to "Birds of America: Audubon Prints from Shelburne Museum" to "Robert Rauschenberg: Synapsis Shuffle." The museum also plays an integral role in the city's annual ArtPrize competition. (ExperienceGR.com)

ArtPrize – A city wide experience of artists from around the world.  Running for two weeks in late September.  “For 19 days, three square miles of downtown Grand Rapids, Michigan, become an open playing field where anyone can find a voice in the conversation about what is art and why it matters. Art from around the world pops up in every inch of downtown, and it’s all free and open to the public.”(ArtPrize.org)

This photograph taken by Rex Larson of the Grand Rapids Press shows the installation of 'Nessie' in the Grand River for Artprize 2009.

The Gerald R Ford Museum and Library is one of Grand Rapids most popular attractions.  The museum is dedicated to native son Gerald R. Ford, 38th U.S. President, where interactive exhibits take you to the White House and the 1976 Republican National Convention. The Gerald R. Ford and Betty B Ford Burial Site is on the museum grounds. (http://www.fordlibrarymuseum.gov/) Frederik Meijer Gardens & Sculpture Park opened in April 1995 and has turned into a top cultural destination in the Midwest region, known internationally for the quality of the art and gardens.  The 8-acre Richard & Helen DeVos Japanese Garden opened to the public June 13, 2015.

"BHT&D was instrumental in getting all the paperwork completed for the purchase of the company and has handled all of our tax returns and financial statements since that time. They’ve done a great job getting the documents completed accurately and on a timely basis...Thanks again for doing a great job for us these past 14 years."