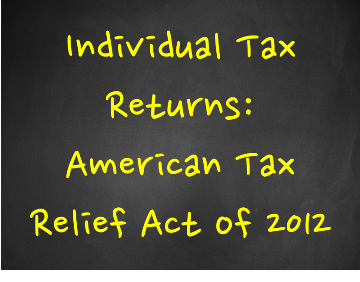 On January 1, 2012 the American Taxpayer Relief Act of 2012 was passed by the U.S. Congress and signed into law by President Barack Obama on January 2nd. It will take effect in 2013 and will impact most taxpayers. Do you know how this will effect you?

Today's article will address a couple questions we hear about how this new tax law impacts your individual tax returns.

Q. How will the signing of the fiscal cliff legislation impact my individual tax return?

A. The American Taxpayer Relief Act of 2012 will impact most taxpayers.  Highlights of the changes which will take effect in 2013:

Q: My employer told me my take-home pay was going to decrease in 2013 due to the new tax law. Why?

A: For two years, employees have enjoyed a 2% reduction in the FICA payroll tax. That will come to an abrupt end beginning with your first payroll check in 2013 when the FICA rate returns to 6.2% (up from 4.2% in 2011 and 2012). Self-employed individuals will have a corresponding increase in SE tax.

If you have questions about this, feel free to comment below or if you would like to speak with one of our CPAs about how this will specifically effect your taxes, fill out this brief form to schedule a complimentary accounting consultation.